Summary: One Nation One Ration Card Yojana scheme launched by PM Modi on 30th June 2020.  The Indian government’s launch of the One Nation One Ration Card (ONORC) plan will help people who migrate to a new place to sustain their livelihood. This initiative makes the state-owned ration services flexible and offers help to the ration cardholders to use a single ration card at their convenience.

With the help of the One Nation One Ration Card system, the government covers 69 crore National Food Security Act (NFSA) beneficiaries in India. The NFSA beneficiaries are used by the government to provide more than 81 crore people with ‘highly subsidised foodgrains’ through the public distribution system (PDS).

The government has launched a new ration app called ‘Mera Ration’ which will help the users to get friendly with the new ‘One Nation-One Ration Card’ system.  The app to get this service is available on android phones on the Google Play Store. Ration card holders are used to getting food grains through the public distribution system known as PDS. Currently, the app interface is available in Hindi and English languages but soon the government plans to add 14 other Indian languages.

Step 2- Registration in Mera Ration app – After downloading the app, you have to register your ration card in it.

Step 3- For this, first open the app. You will see the option of registration, click on it. Enter your ration card number in it and then hit the submit button.

Ram Vilas Paswan, the current Union Minister for Consumer Affairs, Food and Public Distribution announced “One Nation One Ration Card” program in January 2020. This scheme has been launched with an aim to provide subsidized ration supplies to all the ration card beneficiaries through the Targeted Public Distribution System (TPDS) on the basis of the same ration card irrespective of their current dwelling place. 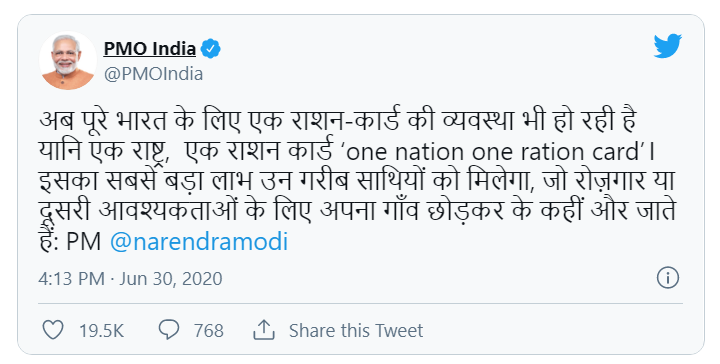 Procedure to Apply for One Nation One Ration Card Scheme 2023

Required Document for One Nation One Ration Card

Objectives of One Nation, One Ration Card 2023

What is one nation one card scheme?

‘One Nation One Ration Card‘ is a scheme implemented by the government providing for nation-wide portability of National Food Security Act (NFS) Ration card. The scheme aims to benefit the migrant workers who constitute more than 1/4th population of India.

What are the benefits of one nation one ration card?

One Nation, One Ration Card scheme entitles migrant workers to buy subsidised ration from any fair price shop at the place of work or stay anywhere in India.

One Nation, One Ration Card is a government scheme to make sure that no citizen sleeps hungry. It was rolled out under the National Food Security Act (NFSA), 2013.

What they get and at what price?

The NFSA ration card holders are entitled to purchase rice at Rs 3 per kg, wheat at Rs 2 per kg and coarse grains at Re 1 per kg.

Why ONORC scheme was launched?

The central government announced rolling out the One Nation, One Ration Card scheme in May 2020.

How many states have adopted ONORC?

Thirty-two states and Union Territories. That is, except Assam, Chhattisgarh, Delhi and West Bengal, all states have adopted the ONORC.

How many people get the benefit?

The estimates of migrant workers vary, from 10-12 crore. The central government currently provides cheaper foodgrains to about 80 crore people across the country under the NFS Act.

How do I check my one nation one card?

When was One Nation One Ration Card scheme inaugurated?

The scheme was launched on a pilot basis in four states in 2019 by Union minister Ram Vilas Paswan.